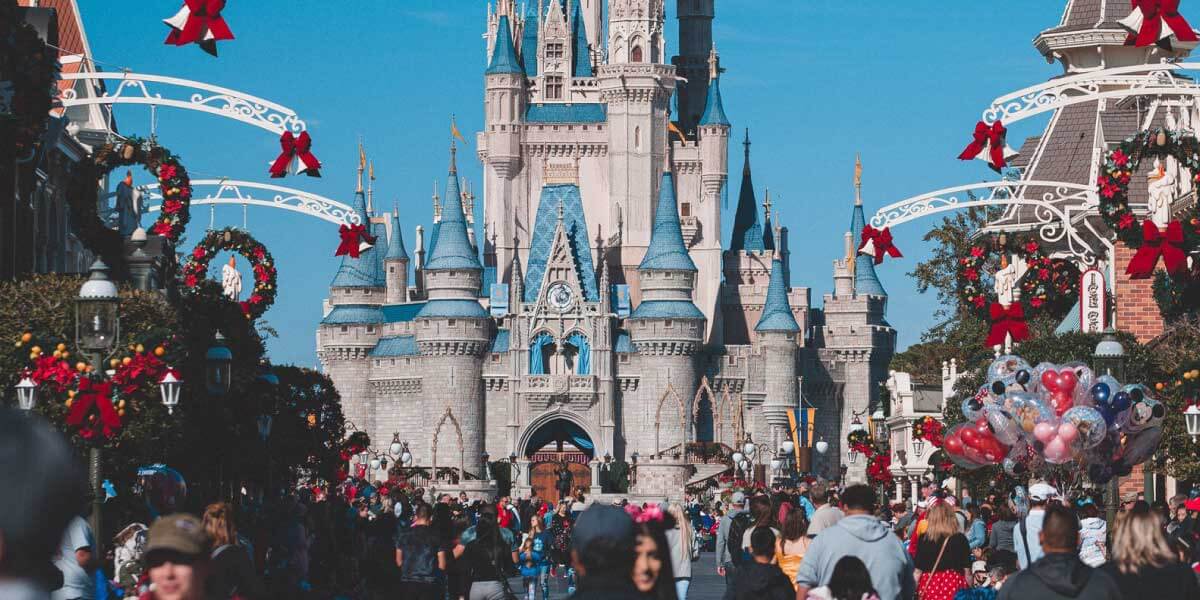 Hey everybody, today I going to discuss a huge question we get asked a lot. What’s the difference between Disneyland and Disney World? I’m not going to tell you which one is better because they both serve their purposes depending on your family. But we are going to talk about the specifics and the differences. So that we can help you make that decision. What’s right for your family on your trip?

The size and location difference between Disneyland and Disney world

The first difference between Disneyland and Disney world is Disneyland is in California. Disney World is in Florida. So depending on your coast, one or the other might be more efficient, more logical for you to choose to visit. Because the plane flight will be shorter and less expensive or you can drive there etc.

Once you’ve figured that out the main difference between Disneyland and Disney World is that Disneyland is much much smaller. Disneyland has two parks, a Downtown Disney district and three Disney owned resorts.

Whereas Disney World is the size of Manhattan, it’s huge 40 square miles, dozens of hotels, four theme parks, water parks the huge Disney Springs dining and shopping district. This place is massive. So how does that affect you?

When you’re in Disneyland, you can walk from the resort to park to park to resort to a restaurant not ever have to worry about getting in a car. When you’re in Disneyworld you’re going to have to take some sort of transportation whether that’s Disney transportation. Your rental car and Uber lift or minivan you’re going to have to get from here to there via some sort of transportation. So that’s a huge concern for maybe folks with mobility concerns? Who are pushing giant strollers around? Disneyland might be a better choice. Because it’s simply easier to get around and to get to everything directly from your hotel. That said Disney World has great transportation. A lot of people see the trade-off, is not that great since it’s easy enough to get around Disney World even though you can’t walk everywhere.

The cost difference between Disneyland and Disneyworld

Okay next up let’s talk about cost. Disneyland and Disney World are both going to cost you an arm and a leg. They’re both extremely expensive. The other thing that’s a is a similarity between the two is that you can do it relatively cheaply or you can do it expensively for both coasts.

When it comes to parking tickets a Disneyworld four-day park hopper right now when we’re publishing this is maybe about 473 dollars per person. Those prices go up every year a little bit. Disneyland affords a park hopper which takes you to only two parks. Remember it doesn’t take you to four parks. It is maybe three hundred and thirty-five dollars a person. Those are for adult prices. You’re saving a few dollars on a Disneyland ticket. But remember you’re also losing to huge theme parks when you consider that. That would make me say that the costs of tickets are comparable for both coasts. Ticket prices are about a wash between the two because at Disneyworld you’re going to pay more. But you’re going to get more parks and Disneyland you’re going to pay slightly less but you only have two parks there.

Other costs to consider Resort Hotel costs. This is always going to depend on whether you stay in a Disney owned hotel or a non-Disney Resort our off property so to speak. One thing we’re going to has a whole resort section later on where I’ll go into detail on this. Again you’re going to find it to be about a wash. Because Disney World has lots of Disney owned resorts, lots of different price points. Disney Land only has three Disney owned resorts and they’re all at deluxe level price points. However, they’ve got a whole bunch of good neighbor hotels. They call them good neighbor hotels. Because they’re kind of approved by Disneyland. That is within walking distance of the parks. So, they’re great hotels they’re decent pricing like a value resort price in Disney World and they’re within walking distance of the parks which is crazy. You just don’t get that in Disney world very often. That’s pretty awesome. I’m going to say this is a wash too in terms of cost for your hotel. Because you can pay the high prices and stay in the Deluxe’s. Or you can pay the lower prices and have a Disney owned Resort Hotel in Disney World or be within walking distance at the park and Disneyland.

Finally as far as the cost for food. This is going to be very comparable. You can always do super cheap stuff, you can do the counter service, you can bring your food or you can do the high-end food both places offer all those options. So pricing on these two options Disney World or Disneyland is going to be pretty comparable and you can save a few bucks here and there. But always remember you’re going to get you to know four parks and a lot more to do over in Disney world than you are in Disneyland. So that’s kind of where the cost savings will come in. So I’d say as far as costs the two again are going to be pretty comparable.

All right so let’s move on to Resort. Like I said you have three Disney owned Resort Hotels in Disneyland. You have the Disneyland Hotel, Grand California and Paradise Pier. I don’t know if they’re going to change the name of that. Are they going to change the name of that? Now that it’s changing to Pixar Pier. I don’t know. Those are all Disney hotels and they’re all very expensive. Four hundred five hundred and I easy. But like I said you also have a lot of good neighbor hotels that are going to be at lower price points closer to those moderate and value resort price points that you find in Disney World.

Lots of good options there except when you’re paying those prices you’re not getting Disney theming at those good neighbor hotels. So that’s something to take into consideration. Then again you’re also within walking distance to those Disneyland parks can’t be fat. So over in Disney World, you have those deluxe moderate and value resorts at all different price points they all have Disney theming. Some of them are within walking distance to the parks. But usually, you have to pay the deluxe level prices to get that walking distance. So, there’s a difference between the resort hotel options in Disney World and Disneyland.

In terms of variety Disneyworld is the winner here because it just offers more options there’s much much more to eat and many more choices and can suit the tastes of a wider variety of people. But for some reason, I’ve always thought Disneyland’s food had a little bit of an edge over Disney world’s food especially that counter service. And when it comes to restaurants I’m not even going to talk about the Disney Dining Plan over in Disney World. Because it doesn’t affect your costs that much. When it comes to what you’re going to buy and eat in the two locations. But if pre-paying for your meals of the thing you want to do that Disney Dining Plan over in Disney World is a good option for you.

Disneyland is going to have your classic stuff. And they’ve got many of the same attractions on both coasts. Splash, Mountain Space, Mountain Toy Story, Midway mania, the teacups, pits a small world those are all going to be similar. Of course, each Resort Disney World and Disneyland are going to have their kind of standout unique attraction from Matterhorn and Disneyland, mission breakout, guardians of the galaxy over in Disney California Adventure. Disney World now has pandora with a flight of passage that incredible ride. So definitely take a look at the rides and see which ones are must use for your family and that’ll help inform which coast you go to.

The big thing when it comes to attractions, that may change your mind, either way, is Fast Pass and my Disney experience system. Over in Disney World, they have my Disney experience app. Where you can make fast passes. 60 days ahead of time you’re staying at Disney World Resort. 30 days ahead of time if you’re not. You can make those right on your phone. You can also change up to cancel your fast passes on your phone right there in the parks. Easy-peasy to use also many more Disney World attractions have fast paths available then Disneyland.

So to me, that’s a huge huge huge detriment to choosing Disneyland is that you can’t make your fast passes ahead of time and you have to pay to make them at all on your phone. And the other detriment is that like I said not a lot of those attractions do have fast pass.

So you’re going to find yourself waiting in those long lines. A lot of times with your children. Because a lot of those attractions were not built to have covered queue systems. So you’re outside, you’re with your kids, you’re wasting hours to ride a 10-minute rollercoaster. So that’s a huge drawback to Disneyland for me. But that’s a big difference to consider do you have little kids? Who aren’t good at waiting in lines? Disneyland is probably not the right choice. However to Disney World where you can make all of those plans in advance and make sure you have your Fastpass is in place for all those rides your kids are going to want to go on. The fact that you can’t make those reservations 60 days in advance or plan your trip you’re in advance. Maybe a benefit or a pro to you if you don’t want to plan everything to death and you just want to go and have a great time, Disneyland is perfect for you.

As you can see there are lots of pros to both Disneyland is easy. It’s so manageable. You can walk around both parks all the resorts in one day if you really need to and well maybe this isn’t something that has important to other people. A lot of us Disney fans who’ve been Disney fans for a long time love that there’s a sense of history in Disneyland. Walt walked those streets he planned that whole resort very carefully and it’s really fun to know that you’re in a place where a while to walk.

However Disneyworld lots of variety, lots of options so much to do and an incredible location in and of itself. So there are lots of pros to both.

The Best Places to Visit in Colorado!

The 27 MOST Surprising Things About Disney World Epcot!

5 Things You Need to Know About Disney World Riviera Resort!